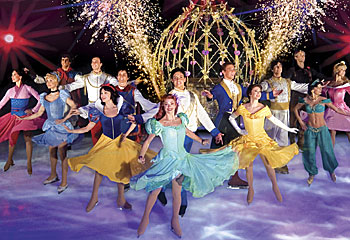 Disney on Ice is an ongoing series of touring ice-skating shows produced by Feld Entertainment, a company most famous as the final producer of the Ringling Bros. and Barnum & Bailey Circus tours. As with Ringling Bros., the shows perform in arenas; unlike Ringling Bros. the shows tour far beyond the United States.

Launched in 1981, each show features a variety of classic and modern Disney (and, since the late 1990s, Pixar) characters played by costumed skaters who mime to a recorded soundtrack. Formats vary from show to show, but boil down to one of the following three:

of most of the shows over the years, as well as more detailed info about the currently running productions. At the Turn of the Millennium Feld Entertainment launched a sister franchise, Disney Live!, whose shows offer similar fare but tour proscenium theaters.

Franchises adapted into the shows
Advertisement:

Disney on Ice provides examples of: