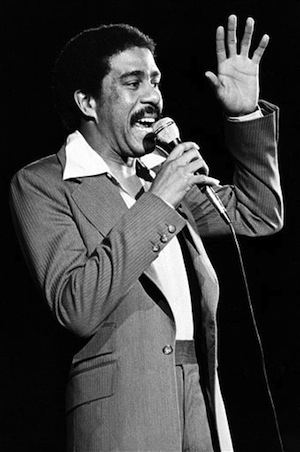 “There are many different kinds of comedians: the observational humorist, the impressionist, the character creator, the physical comedian, the self-deprecator, and the dirty-joke teller. What made Richard Pryor so brilliant is he was able to incorporate all these styles at once.”
— Damon Wayans
Advertisement:

Richard Franklin Lennox Thomas Pryor (December 1, 1940 — December 10, 2005) is often cited as one of the greatest stand-up comedians of all time (and a lot of people say the best). And just for once, they might actually be onto something there. His act influenced (and continues to influence) comedians varying from Eddie Murphy to Bill Hicks to Eddie Izzard.

He started out as a fairly non-controversial figure, influenced more by Bill Cosby than Lenny Bruce, and generally peddled his safe observational material to predominantly white audiences. It wasn't until an "epiphany" during a performance in Las Vegas in 1967 — where he exclaimed "What the fuck am I doing here?!" over the microphone, before walking off the stage — that he would begin to develop his own profane, raw, and increasingly confessional style of comedy.

Although he took pot shots at a variety of targets, it's arguable that his most hilarious and biting material concerned his own life. Whether it was shooting up his own car with a magnum, his drug addictions, his childhood, or his health problems, Pryor would bare his private life in front of his audience in a way that even his most devoted followers could rarely come close to. His most notable routine concerned nearly accidentally burning himself to death in 1980 while freebasing cocaine, documented on his 1982 album Live At The Sunset Strip, and also in the 1984 film Jo Jo Dancer, Your Life Is Calling, a semi-autobiographic drama that Pryor wrote and directed. (Seriously, can you even picture Eddie Murphy trying to laugh off his "Good Samaritan" incident with a transvestite prostitute in his stand-up?)

Despite the controversies over his lifestyle and material (in 1974, he was replaced by Cleavon Little Jr., for the role of Bart in Blazing Saddles, because Warner Bros. deemed him uninsurable due to his drug habits; in 1977, a variety show created by Pryor on NBC only lasted 4 episodes note but was notable for a cast that included Robin Williams, Paul Mooney, and Sandra Bernhard ). Pryor eventually found a degree of mainstream success, most notably in two films (Silver Streak and Stir Crazy) where he was paired with Gene Wilder note two later films with Wilder — See No Evil, Hear No Evil and Another You — were less well-received., and in Superman III. He largely retired from the public eye after being diagnosed with multiple sclerosis in 1986, but made occasional posts online, and even made an appearance in the David Lynch film Lost Highway. In 1998, he became the first recipient of the Mark Twain Prize for American Humor.

He died in 2005 following a heart attack. In 2008, in a poll taken from nearly 5000 of his fellow stand-up comedians, he was voted the funniest stand-up comedian of all time, narrowly beating out his long-time friend, George Carlin, for the title.note Lenny Bruce, coincidentally, came in third.

Examples in Stand Up Comedy