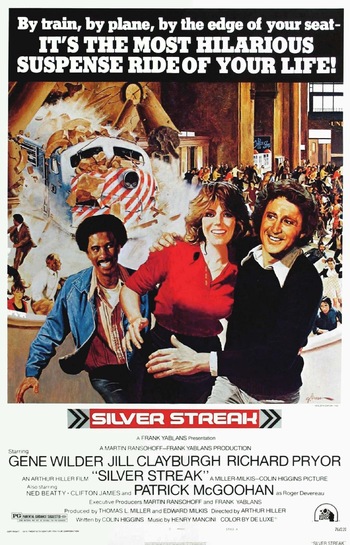 "Getting on the Silver Streak is easy. Staying on is the problem."
Advertisement:

George Caldwell (Wilder) is a book editor traveling from Los Angeles to Chicago via a passenger train nicknamed the "Silver Streak". On board, he meets a vitamin salesman named Bob Sweet (Ned Beatty) and a secretary named Hilly Burns (Clayburgh), whom he quickly romances.

While trying to get intimate with Hilly, George sees the body of Hilly's employer, Professor Schreiner, falling off the roof. When George attempts to investigate, he too is thrown off the train. He eventually makes his way back on the train, and tells Bob Sweet what happened. Sweet reveals that he's actually an FBI agent who's been tailing international art dealer Roger Devereau (Patrick McGoohan), whom he believes to be the one responsible for Schreiner's death. Schreiner's new book on Rembrandt would have exposed several of Devereau's prized pieces as frauds. However, Devereau's henchmen kill Sweet and attempt to kill George, who escapes the train hoping to inform the authorities. Unfortunately, Devereau has already framed George for Sweet's death. He is able to evade the police with the aid of a thief named Grover T. Muldoon (Pryor), and must find a way back aboard the Silver Streak to stop Devereau and rescue Hilly.

This was the first of four films that Wilder and Pryor appeared in together, though Pryor plays only a supporting character this time.