Film / The Man in the Glass Booth 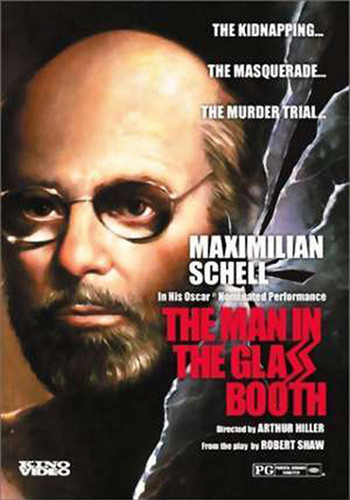 We are introduced to Goldman as he issues orders to his assistant Charlie Cohen over business, rants about the death of his father in Auschwitz at the hands of SS Colonel Karl Dorf, whom he barely survived, and seems paranoid that Dorf remains alive, plotting to finish him. Goldman compares himself to Jesus Christ and generally comes off as a raving, nearly deranged man. Then his paranoid fantasies seem to be justified, as the same car is seen across from his building numerous times, and he finally orders Charlie to go confront its occupants. They turn out to be Israeli agents, who burst into his apartment with guns drawn, accusing him of being Dorf, and displaying medical evidence which they say proves it. Proudly admitting it now, he is taken back to Israel and put on trial for crimes against humanity, where he defends himself (in SS uniform) from inside of a bulletproof glass booth, hence the film title.

Shaw originally wrote Glass Booth as a novel inspired by the kidnapping and trial of Nazi war criminal Adolf Eichmann, but later decided the story worked better as a play. The original Broadway production was directed by Harold Pinter and starred Donald Pleasence as Goldman, with F. Murray Abraham and Abe Vigoda among the supporting cast. The movie version was adapted by Arthur Hiller as part of the American Film Theatre series.

The original story also has some unusually strong links to the Star Trek franchise: Leonard Nimoy played the lead role in the original play after Pleasence, and the story was remade into the Star Trek: Deep Space Nine Bottle Episode, "Duet," one of the finest episodes of that series.