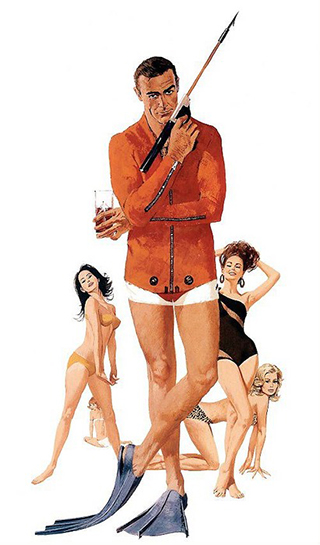 And that's how you put Cupid out of his job.
Advertisement:

Sometimes, a bow and a quiver of arrows aren't big enough to finish the job; you'll need spear-sized arrows, or a more high-tech looking weapon. Thankfully, there's the Harpoon Gun for that. This is a realistic weapon for many underwater fight scenes, and may also show up elsewhere, often as a bit of an improvisation; killing an opponent with a big, barbed projectile can look either badass or horrific (or both), according to how it's presented. Harpoons can also fit the style for a heavily nautically-themed character.

In reality, hand-held harpoon guns used by divers generally use elastic cords to propel harpoons over fairly short distances to spear fish, a bit like an underwater crossbow. However, some firearms designed for underwater use are basically miniature harpoon guns, throwing slim darts — normal guns simply won't work for anything further than point-blank range underwater, if at all. (Not that darts carrying much further, but they can be optimised for the job.) Whaling ships, on the other hand, may mount big harpoon guns — basically low-power cannons firing big barbed spears. Some harpoons have cables attached so that the user can reel in anything the barbed harpoon latches onto, thus functioning like a Grappling-Hook Pistol.

After losing its left gauntlet armor in the previous battle, Barbatos is later equipped with The Wire Claw taken from Gaelios' EB-05s Schwalbe Graze.

After losing its left gauntlet armor in the previous battle, Barbatos is later equipped with The Wire Claw taken from Gaelios' EB-05s Schwalbe Graze.