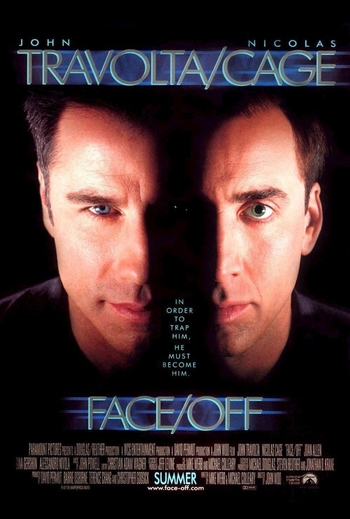 "In Face/Off, John Travolta is an FBI agent and Nicolas Cage is a dangerous lunatic (he plays a terrorist). At one point Cage's character dresses up as a priest, headbangs his way into a church and grabs the ass of a girl singing in the choir. Then he and Travolta switch faces, literally. Everything about this movie is insane, is what we're saying."
— Cracked, "6 Absurd Movie Scenes (That Actually Happened)

Face/Off is the second American Heroic Bloodshed film by Hong Kong director John Woo, starring John Travolta and Nicolas Cage playing an FBI agent and terrorist, as arch enemies fighting it out to see who can use the most guns at the same time. Oh, and then they switch places to save Los Angeles.

FBI Special Agent Sean Archer (Travolta) has been pursuing his Arch-Enemy, terrorist-for-hire Castor Troy (Cage), for six years, ever since Castor sniped Archer's six year old son Michael dead during an attempt on Archer's life. After an intense gunfight, Archer captures Castor, putting him in a coma in the process. However, Archer is nonplussed to learn that before Castor's lights went out, he placed a bomb somewhere in Los Angeles.

Theoretically, this would be the point where the movie completely jumps the rails — but that would be assuming it was ever on rails to begin with.

In order to find where Castor has planted the bomb, Archer is forced to have Castor's face surgically transplanted onto him so he can get close to Castor's nerdy brother Pollux (Alessandro Nivola). Except, while Archer (now played by Cage) is away, Castor wakes up from his coma and forces the doctors who performed the surgery to do the same to him, and then murders them and everybody else who knew about the operation. With his new face, Castor (now played by Travolta) begins inserting himself into Archer's life, including wife Dr. Eve Archer (Joan Allen) and daughter Jamie Archer (Dominique Swain).

Although the film is a straight-up action flick with all the requisite high-speed chases, hidden bombs and hostage situations, it's also very much tongue-in-cheek.

In February 2021, Paramount Pictures finally announced a sequel has been greenlit, with Adam Wingard (of You're Next, Death Note (2017), and Godzilla vs. Kong fame) as director and his buddy Simon Barrett writing, with a currently unknown release date. It's also unknown if Travolta Will return as Sean Archer, or in any capacity, same for Cage.

Not to be confused with the series Face/Off, a makeup-F/X reality competition on the SyFy Channel.