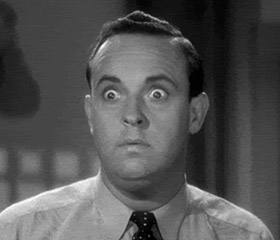 The non-verbal Big "WHAT?!"
"In front of him just above the camera was a huge clock which, as the minutes passed and guests turned boring, he tended to stare at, waiting to be released from his role. One performance, when he wasn't looking, a member of the crew pushed back the hands of the clock fifteen minutes. Carson's momentary look of despair when he saw the clock got a laugh even though the audience had no idea why."
— Gore Vidal on Johnny Carson, Point to Point Navigation
Advertisement:

Occurs in a Reaction Shot. The character reacting to the outrageous whatever says nothing, but their eyes widen in a "these people are crazy" kind of way.

Sub-trope of Facial Dialogue and The Take. Compare Aside Glance when directed at the fourth wall, Fascinating Eyebrow when directed at the characters in question, and Eye Pop or Wild Take for surprised cartoon characters' eyes. May make use of Eyedscreen as well as Wide Eyes and Shrunken Irises. Sometimes related to Oh, Crap!. No relation to Eye Scream.