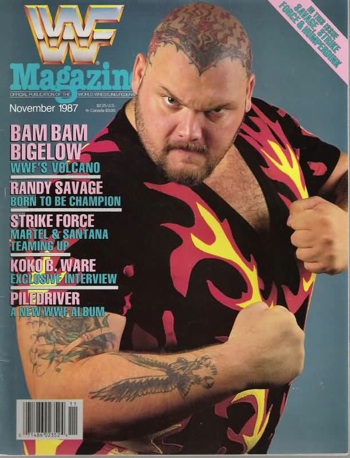 "BAM, BAM."
Bam Bam Bigelow (real name Scott Charles Bigelow, September 1, 1961 – January 19, 2007) was an American professional wrestler from New Jersey, commonly referred to as "The Beast From The East." While his most famous run was with the WWF, he also made appearances for WCW and ECW in the 1990s. A big man, nearly 400 pounds, Bam Bam stood out from the other monsters in the business by being particularly agile for his size, as well as his trademark look: tights with a flame motif to match the tattoo of flames on his skull.
Advertisement:

and the WCW Hardcore Championship

. He never held any titles in the WWF, but he was also part of numerous pay-per-view main events and many memorable moments in the company's history. In a famous WrestleMania main event in 1995, he main evented against New York Giants linebacker Lawrence Taylor. By the end of the 1990s, Bam Bam was in WCW and stayed there until the bitter end.

Some of you may remember him in his cameo appearance as a biker in the movie Major Payne. You know, the big biker dude who got his ass handed to him in about 5 seconds.

"Tropes from the East":