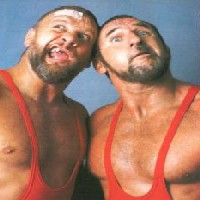 L-R: Luke Williams, Butch Miller
"You can't even say a comedy team. Them two, the Bushwhackers, are the toughest sons of bitches I've wrestled. I used to hit Luke and Butch, and there's a little bit of age difference there, and I'll tell you one thing, they never complained."
—Brian Knobbs, The Pro Wrestling Hall of Fame: The Tag Teams
Advertisement:

Butch Miller (b. Robert Miller in 1944) and Luke Williams (b. Brian Pickens in 1947) were a Professional Wrestling Tag Team best known as The Bushwhackers and The Sheepherders. They started in their native New Zealand in 1964, and Steve Rickard, who was also the booker for NWA Hawaii, brought them to America. They competed for Stampede Wrestling in Calgary as The Kiwis, "Crazy" Nick Carter and Sweet William. Starting in 1979, they worked for both the NWA Pacific Northwest Wrestling promotion in Portland and in Canada as The Kiwi Sheepherders. Following runs in NWA Mid-Atlantic and the World Wrestling Council in Puerto Rico, Miller returned home and Williams replaced him with Lord Jonathan Boyd. This ended when Boyd suffered a broken leg while he and Williams were working for Southwest Championship Wrestling in San Antonio, leading to Miller's return. They also worked in Florida, Mid-South/UWF and for the National Wrestling Alliance before surprising many people by jumping to WWE in late 1988 where they became the Bushwhackers, Luke and Butch. They were midcard Faces for their entire run, but never got to hold the WWE World Tag Team Titles

. They also made a few appearances in ECW in 1998, where they were billed as "the Dudleys from Down Under," "Cousin Luke Dudley" and "Cousin Butch Dudley." Their last major WWE appearance was in the Gimmick Battle Royal at WrestleMania X-7. Butch retired following a neck injury in September 2001. Williams has continued to work the independent scene on and off for years. Among their in-ring achievements, they were 2x Stampede International Tag Team Champions

"It's bloody lovely, tell your mutha"