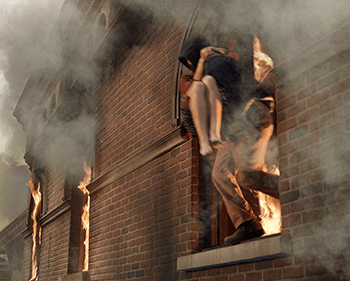 "...after having heard the explosion from their practice facility they ran into the fire to help get people out... ran into the fire."
— Bartlet, The West Wing, "20 Hours in America, Part II"
Advertisement:

A common way for a work to show a character is heroic is by having them putting themselves in harm's way to rescue others, and the fire rescue is a classic example (which is another reason why Firemen Are Hot). The fire might be a burning building, or car, or any other fire in general, but generally it will threaten the life of the character who enters it. Expect it to happen regularly in a work focused on firefighters.

A subversion sometimes occurs where a character will attempt to invoke this trope by setting the fire themselves, and then enter into it to rescue someone, hoping to come off as a hero. Usually this will backfire spectacularly. The character in this case is a Heroism Addict, and likely to be an actual villain.

Can be used as an Establishing Character Moment, Rescue Introduction or to kickstart a Rescue Romance. If the character is already shown as being heroic, it can be used to underline their Chronic Hero Syndrome.

Please Don't Try This at Home, as you're more likely to end up needing to be rescued yourself... if you even survive.

Dusty manages to use all his strength and effort to save Harvey and Winnie from the burning and collapsing bridge at Augerin Canyon, but sadly also had to pay the ultimate sacrifice for his courage.

Dusty manages to use all his strength and effort to save Harvey and Winnie from the burning and collapsing bridge at Augerin Canyon, but sadly also had to pay the ultimate sacrifice for his courage.