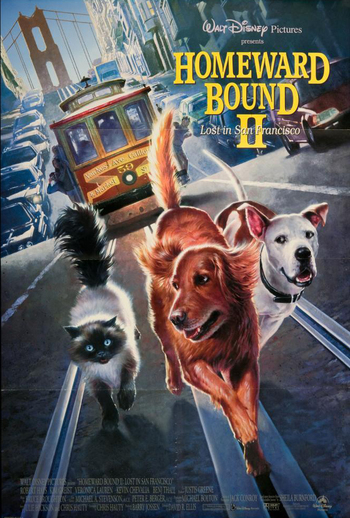 Homeward Bound II: Lost in San Francisco is the 1996 sequel to Homeward Bound: The Incredible Journey. Michael J. Fox and Sally Field reprise their roles as Chance and Sassy, while Ralph Waite replaces Don Ameche as Shadow after the latter's death in 1993 (a few months after the original film's release).
Advertisement:

A family vacation goes awry when Chance escapes from his carrier during a trip through the airport, believing that he's being sent back to the pound. Shadow and Sassy help Chance escape and the three find themselves lost in San Francisco—with home on the other side of the Golden Gate Bridge. On their journey home, they befriend a pack of strays led by Riley, and Chance falls in love with stray named Delilah. Complicating their quest are a duo of mean dogs, and a couple of dognappers in their "Blood Red Van" who are looking for strays to sell for animal testing.