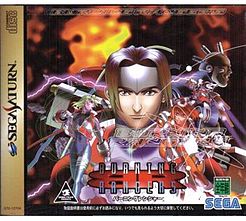 Burning Rangers is a Third-Person Shooter (of sorts) on the Sega Saturn. Developed by Sonic Team and dreamed up by Yuji Naka (and others) this game is perhaps the best in-house Sega game for the Saturn.

Set in the near future as we follow an elite team of fire-fighters. They respond to any major incident by: hopping into their spacecraft, teleporting down, subduing the fires by shooting lasers at them and reducing them into crystals, using their jetpacks to navigate the terrain, before finally teleporting the survivors off onto their spaceship. Throughout the game we fight malfunctioning robots and save people in: a factory of some sort, an underwater aquarium, a orbiting space station and a man-made asteroid.

On the asteroid is a young girl was suffering from an incurable disease, placed into stasis and sent into space with a powerful AI to monitor her situation and any progress on the cure. However once the AI finds out a cure has been found it sends the asteroid on a collision course with earth and is also, somehow, responsible for the disasters that have been taking place in the game. Its up to the two young rookies of the team to save the girl, save Earth and teach children about the dangers of naked flames.

While the game hasn't received a sequel and is potentially the least successful game Sonic Team has ever made, it's still fondly remembered to this day and receives cameos and references in some of Sega's games. (Especially the songs.) Yosuke Okunari, head of Sega's recent re-releases, has stated that if NiGHTs HD sells well, he will attempt to propose a HD re-release

of Burning Rangers as well. The ball is in your court, fans.