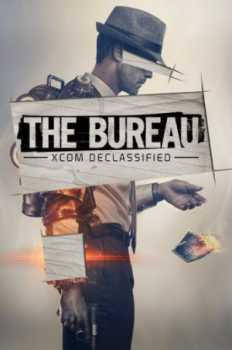 Erase the truth.
"The nations of the Earth must someday make a common front against attack by people from other planets."
— General Douglas MacArthur
Advertisement:

The Bureau: XCOM Declassified is a tactical Third-Person Shooter prequel to the 2012 XCOM: Enemy Unknown by 2K Games, for PC, Xbox 360, and PlayStation 3. It was released on August 20, 2013.

Turns out that the "Bureau of Strategic Emergency Command" (which would later become XCOM) was established by JFK as a rapid response unit against communist invasion rather than aliens. But when the Outsiders arrive in middle America in 1962 and Sectoids start showing up in the streets, all bets are off and The Bureau reorganizes itself into XCOM to fight back. The game shares much with Enemy Unknown, including art style, cover mechanics, and emphasis on tactical thinking instead of running-and-gunning. Mike Futter of GameInformer compared it to the later Mass Effect titles in feel.

The Bureau had a Troubled Production. When it was initially announced, XCOM: Enemy Unknown had yet to be revealed, so many fans of the X-COM series were appalled to see the franchise revived as an In Name Only First-Person Shooter, leading to massive fan backlash. In response, The Bureau (then known simply as XCOM) was delayed, renamed, and heavily reworked to have more in common with the rest of the franchise. Such changes included a shift to third-person, a greater emphasis on tactics, and the alien antagonists going from Starfish Aliens to Sectoids and other familiar X-COM species. Meanwhile, the entire production was delayed as 2K Marin went to assist Irrational Games with BioShock Infinite.

You play as William Carter, a CIA operative stuck in a desk job thanks to a Dark and Troubled Past that interfered with his otherwise stellar work overseas, who has just arrived at a remote military installation in Groom Range, Nevada with a briefcase in tow, containing a top-secret item that no one else is allowed to handle. Shortly after Director Faulke of the Bureau summons him, he is attacked by the person sent to escort him and choked into unconsciousness. When he comes to, his attacker is dead, but the item has been destroyed. He leaves his room, only to find the base under attack from advanced beings not of this Earth...

A small number of DLC has been released:

The Bureau: XCOM Declassified contains examples of the following tropes: