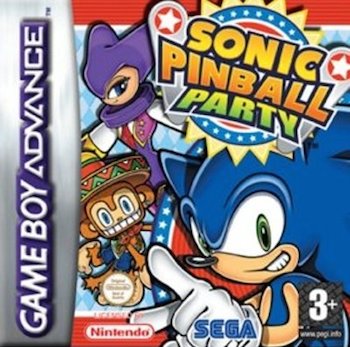 Sonic Pinball Party is a video pinball game developed by Sonic Team and published by Sega. It was released in 2003 for the Game Boy Advance.

As the name indicates, Sonic Pinball Party is a collection of Pinball-related games focused on the characters of the Sonic the Hedgehog series, along with guest appearances by NiGHTS and Samba de Amigo. There are five distinct game modes in all:

In addition to standard playfield obstacles, the pinball tables embraced their video game heritage with wandering enemies, collectable items, and bosses to battle. The game as a whole was highly rated by players, who praised its variety, action, and excellent music. If there is a complaint, it's that the ball physics are a bit too floaty and light, making it sometimes difficult to trap balls with the flippers.

In North American markets, the game was originally released as a Target store exclusive — which stymied gamers in Canada and Mexico, where Target did not operate. The game was later re-released as part of several compilation packs, increasing its availability.