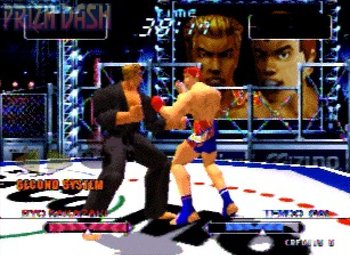 Older Ryo Sakazaki and Gai Tendo before we knew them in NGBC and KOF XI respectively.
Buriki One is a Fighting Game made by SNK in 1999 for its 3D arcade hardware Hyper Neo-Geo 64 and the final one developed for this short-lived system. The main plot is about a tournament in Tokyo Dome where contestants of various combat sports and martial arts fight to determine which fighting discipline is better.
Advertisement:

The game aims for a more realistic feel compared to other arcade fighters and features a unusual system in which buttons are used to move forward or backwards or pressing both to block, and the joystick is used to attack and grab the opponent. Taking cues from Mixed Martial Arts, players must knock out their opponent, make them submit, or winning a 3-point judgment after the timer runs out. Fighters can be knocked out of the ring, but instead of ending the round, this resets them to their initial position when the fight begins. The game also lacks projectiles, favoring close combat instead.

The game is recognizable for its protagonist Gai Tendo, who appeared in other SNK artworks and games in cameos as well as a Breakout Character in The King of Fighters series, where he and boss character Silber featured as bonus characters in The King Of Fighters XI. Also, this game featured an older Ryo Sakazaki as the representative of Karate in this game, following AOF and FF chronology as the new Mr. Karate, being older than his previous appearances outside KOF and has appeared in other games, notably NeoGeo Battle Coliseum.

At the moment, actually playing the game is a bit of a challenge, as it received no home release and emulation of the Hyper Neo-Geo 64 hasn't reached a satisfactory level, this has affected other HNG64-based games like the Samurai Shodown 64 series. There are clips of this game on YouTube, but the only options at the moment for actually playing it are to buy the HNG64 hardware and the game to play by your own or travel to Japan and hit up a local arcade.

The Other Wiki has an article about this game here

, as does the SNK Wiki

. Also, Wayback Machine has an archive of the official page on SNK's old site here

Disciplines represented in Buriki One: