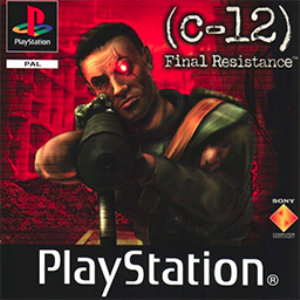 Riley Vaughn Is About to Shoot You.
Advertisement:

C-12: Final Resistance is a post-apocalyptic Third-Person Shooter created by SCE Studio Cambridge, released on the PlayStation in 2001.

Years have passed after aliens invaded earth to harvest its carbon resources and destroy humanity. Facing extinction, humanity has formed a resistance to fight off the alien threat. Lieutenant Riley Vaughn, a cybernetic soldier, is sent out into the field to deal with aliens and rescue soldiers in need along with his partners Colonel Grisham and Dr. Carter, before it's too late.