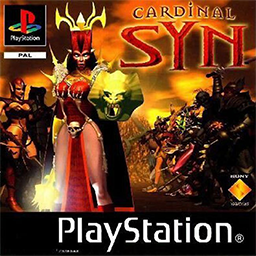 Cardinal Syn is a 1998 fighting game for the PlayStation, developed by Kronos Digital Entertainment. It is set in a war-torn fantasy world, and features characters both human and non-human alike.
Advertisement:

The game contains free roaming features that allows you to move around a small interactive battlefield during combat. The game also features stage hazards, fatalities, projectiles, and battlefield powerups, to add to the melee, weapon-based combat.

The game's story is thus: War had engulfed the Clans of the Bloodlands for numerous generations, each having a great hatred for the other. But one day a mysterious old man put a stop to the carnage, summoning all the clans together and read from his Book of Knowledge which spoke of the harmony they could achieve by uniting in peace. For many years, the Clans put aside their weapons and enjoyed peace under the guidance of the stranger they had named the "Wanderer". Then when the land seemed to be paling and dying, the stranger divided the Book into scrolls and gave one to each clan before he vanished before their very eyes.

It took no time at all before the Clans were at each other's throats, vying for control of all the scrolls in the Book's entirety. War again fiercely reclaimed the Bloodlands. And then, in the middle of a particularly brutal battle, a mysterious, magical woman named Syn appeared brandishing the icon of the Wanderer that he had used as a symbol of clan unity. She coerced the clan leaders to hand their scrolls over to her where she turned them into three inscribed swords which held the knowledge of the Book.

She then declared a tournament. Each clan would send its greatest warrior to engage in battles to the death. The survivor and winner of the tournament would be declared ruler of their Clan and given the entire Bloodlands to command, as well as gain access to the secrets of the swords. Yet that first tournament saw no winner, as Syn herself secretly killed the final warrior. As centuries passed, the wars continued to rage. Now, a new tournament is about to be held. In response, the Clan leaders are sending their very best to battle for the rite to power.

Not to be confused with the Catholic Cardinal named Cardinal Sin.