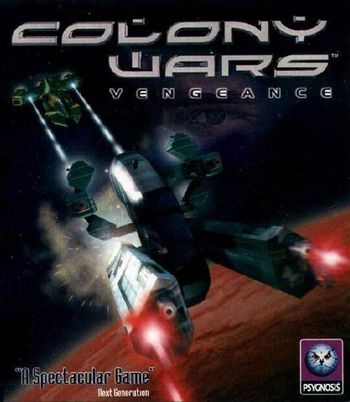 There are so many ways a war can turn; just one mission can make a difference.
Advertisement:

A trilogy of space combat games by Psygnosis for the PlayStation; the original Colony Wars told of an epic civil war between two factions of humanity, the Earth Empire and their Colonial Navy against the secessionist League of Free Worlds. The player steps into the role of an anonymous League pilot during what will turn out to be the final phase of the war one way or another, as the technologically inferior League fights to throw off the oppressive Empire. Unusually for a game with Multiple Endings, the canon ending isn't the best one; the League is able to push the Empire all the way back to Sol, but is unable to take the home-system and instead seals it off, condemning what remains of the Empire to civil war over the tiny scraps of resources left.

The second game, Vengeance, takes place one-hundred years later. The player now controls Mertens, one of many pilots united by the charismatic leader Kron under a new Navy hell-bent on re-building the portal device needed to establish interstellar travel outside of Sol and take vengeance on the League. It's not quite that simple, and the game's subtitle turns out to have a Double Meaning.

The third game, Red Sun, takes place concurrently with Vengeance and follows Valdemar, a worker on a mining colony far removed from the re-newed conflict. One night, a mysterious man known as "the general" appears to him in his dreams, recruiting him, whether Valdemar likes it or not, to fight a more alien threat to civilization than the Navy and League's seemingly endless conflict. Red Sun ends before showing a resolution to the conflict of Vengeance, so there is no canon ending.