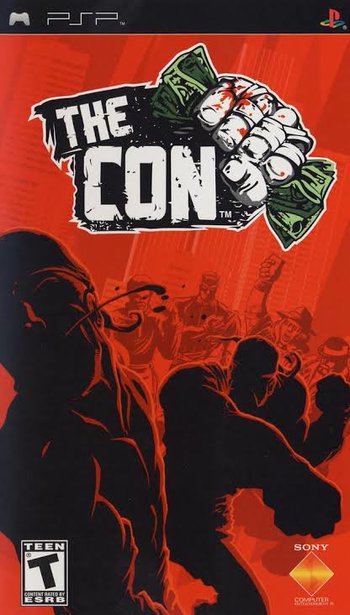 The Con (also known as Gamble Con Fight in Japan and The Con: Gamble Fight in South Korea) is a Fighting Game for the Sony PSP. It was developed by a Japanese company called Think & Feel and published by Sony. It takes on an urban flair with an emphasis on betting, with the ability to throw matches, but making them look convincing.
Advertisement:

The main plot is about the player gets out of the prisoner transport vehicle and uncuffed by the guard. Then he gave the player a business card from Kuro, but he throw it off and followed Reina instead. Reina then teaches the player how fight opponents, con people's money, and pureposely lose for the sake of money. After that, the player confronted Reina and told her He/She's done. Reina then replied that she owns the player, which leads to the player challenging Reina in the Junkyarf, but unfortunately, she was shot by the van driver. The player then soon recruits two random fighters to create a team and make it to the Big Time tournament to find out the real perpetrator behind Reina's death.

The main obvious point of the game is to con people. You either bet yourself, act like the loser, and when the bet starts, you make a huge comeback. Or "take a dive", where you bet on your opponent, act like a winner, and when the bet starts, purposely lose yourself without making the con meter thumbs down, or you're gonna taste the beatdown of the crowd and gives you few injuries.

The game has a mixed reception in few days after its released, but despite that, it's considered as a hidden gem for some people.