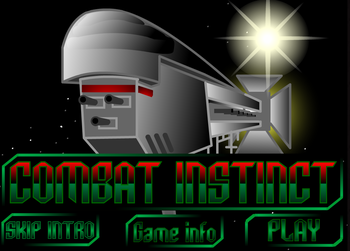 Combat Instinct is a Adobe Flash Rail Shooter trilogy made by McFretN. They are some of the oldest Flash games out there, with the first

being uploaded to Newgrounds in 2000, and the third

The story has the player battle the Gnork race to defend humanity, in a series of battles that culminate with a nuclear bombing of their world. The aftermath crashes your own ship, but also draws the attention of a seemingly friendly race, the Hrumians, who provide assistance to your cause. However, this only lasts until the defeat of the Gnork, at which point the Hrumians turn their attention on you.

, a spin-off animated short taking place in the same setting

Tropes present in the trilogy: