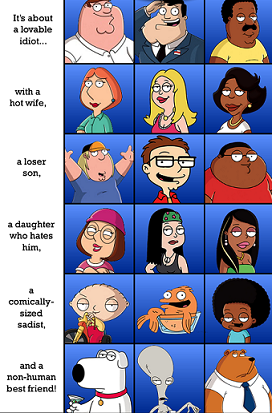 MacFormula.shows Left to right: Family Guy, American Dad!, and The Cleveland Show.;additional similarities Oh, and all three non-human best friends are voiced by Seth MacFarlane.;differences Tim the Bear has a family and doesn't live with Cleveland; the others don't (although Brian had Jillian as his long-term girlfriend for a whole season until they broke up) and live with their respective main characters.
Advertisement:
"What I'm trying to say is, they're the Space Avengers. But I guess it's technically not stealing if they're ripping off themselves."
— Honest Trailers on Guardians of the Galaxy

Sometimes, a work becomes a surprise success and various imitators are made in its wake, usually by different creators. But on a few occasions, the same creators (or at least, the parent company) will make something that appears to be a transparent ripoff of their own success. This is different from Spiritual Successor in that the series are usually made in the same time period and that there is no reason the newer product couldn't have used the same license as the older work.

There are many reasons for this. It may be because of the executive's belief that lazily changing the setting will in itself attract more viewers, milking a cash cow without making it seem too obvious or simply an author being unable to shake off his Signature Style.

This isn't simply a matter of recurring tropes, such as those defining a genre, making up a Signature Style, or inspiring a Spiritual Licensee. The "plagiarized" work should be the same on a conceptual level, to the point that if it was the work of a different creator there could be a lawsuit in the works.

A lot of what's on Recycled IN SPACE! is an example of this. Compare and contrast Expy (which is when an author recycles one or more characters but not the rest of the story), Follow the Leader, Better by a Different Name, and Recycled Script.