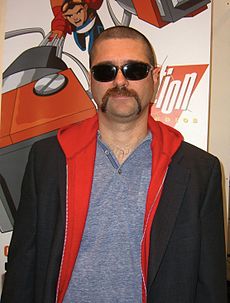 American comicbook writer and one of the four founders of Man of Action Studios, creators of Ben 10 and Generator Rex. Mostly known in comics for the fact that he seems to be two writers - one who writes straightforward and fun superhero stories, including miniseries set in the early days of the X-Men and The Avengers, and another who writes metafictional and often deeply offbeat and weird stories.

Tropes Casey is known for: