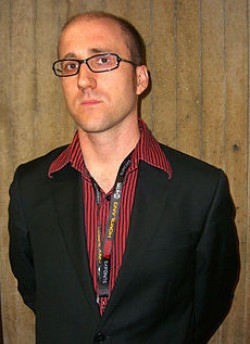 Kieron Gillen (born 30 September, 1975) is a British comics writer and game journalist, known for his series The Wicked + The Divine, DIE, Phonogram and several Marvel books, including Uncanny X-Men, Journey into Mystery (Gillen), Iron Man, Young Avengers, and Star Wars: Darth Vader. He also helped found, and for a long while wrote for Rock, Paper, Shotgun

Many of his best-known works, including Phonogram, Young Avengers, and The Wicked and the Divine, are collaborations with artist Jamie McKelvie.

Not to be confused with Karen Gillan. He has a tumblr.

Notable works by him include:

Marvel titles he has worked on include:

Tropes present in his works: