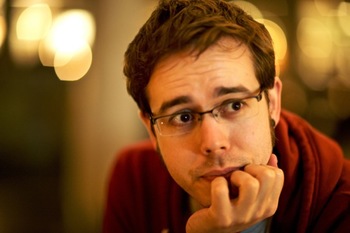 British comics artist and writer, best known for the Image series The Wicked + The Divine, the Marvel series Young Avengers, and designing the costumes of Carol Danvers and Ms. Marvel (2014). He also is also a prolific poster designer for Pop music bands like Chvrches or Tegan & Sara. He created the music video for Chvrches’ “Bury It.”
Advertisement:

He has a clean photorealistic style, a tendency to play with page layout, and a love for fashion that shows in the varied clothing of his characters, sometimes bordering Unlimited Wardrobe.

Has a Vitriolic Best Buds relationship with writer Kieron Gillen (just look at their Twitters), with whom he works on Phonogram, Young Avengers, and The Wicked + The Divine. His other frequent collaborators are artist/colourist Matthew Wilson and letterer Clayton Cowles.

He has been branching out as a comics writer. He contributed as a writer/artist to Captain Marvel #30. In 2019 he announced an Image series on which he would serve as sole writer and artist. Its planned 2020 release was delayed due to the pandemic and ongoing health issues.