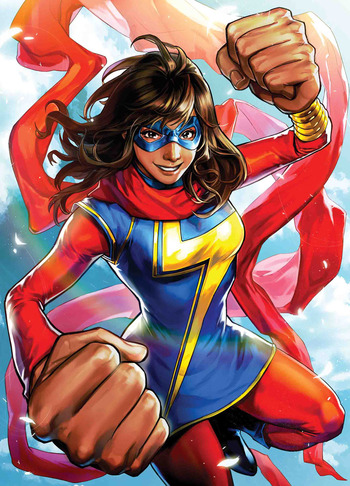 Ms. Marvel is an ongoing monthly title published by Marvel Comics, which launched in February 2014. It was originally written by G. Willow Wilson, with rotating art by Adrian Alphona (Runaways) and Takeshi Miyazawa. This run is split into two sections due to a relaunch post-Secret Wars (2015), which are counted as the third and fourth volumes of the Ms. Marvel title — the first two cover Carol Danvers' tenure. In 2019, Saladin Ahmed took over as the new writer and retitled it The Magnificent Ms. Marvel. In 2021, the series saw another relaunch under the title of Ms. Marvel: Beyond the Limit.

Kamala Khan is a nerdy teenage girl from a Pakistani-American family of Muslim faith living in Jersey City — not New York City, unlike most of the heroes who populate the Marvel Universe.

After being exposed to Terrigen Mist, Kamala discovers she has Inhuman DNA and her latent Voluntary Shapeshifting power becomes apparent. Inspired by her heroine Carol Danvers, who had recently abandoned the Ms. Marvel title to become Captain Marvel, Kamala decides to use her newfound abilities to protect her home and those in need.

Following an initial run of nineteen issues, this title was put on hold for Secret Wars (2015), concluding with a four-issue story arc that saw Kamala meet her idol and namesake, Captain Marvel. Ms. Marvel returned with a new volume in the All-New, All-Different Marvel universe that emerged from Secret Wars. See Ms. Marvel (2016) for more info.

This title is the only Marvel comic that exceeds its physical sales digitally, likely because its fanbase skews young and female — a demographic not likely to buy monthly physical issues in a comic shop. (That we know of, anyway — publishers do not release their digital sales numbers to the public, but it's an open secret that Ms. Marvel is a digital juggernaut.)

Kamala is notable for being one of the most prominent (and heroic) Muslim characters in popular culture; she was co-created by Wilson (a Muslim convert herself) and Marvel editor Sana Amanat — a Pakistani-American Muslim woman not unlike Kamala — who currently serves as their Director of Content & Character Development.

Marvel's Infinity Comics imprint later released a Webcomic adaptation of the start of the series, restructuring the art into a 'verticalized' scrolling format and splitting the original issues into shorter chapters. The first chapters of the adaptation were released May 17, 2022.

Kamala is set to make her Marvel Cinematic Universe debut in the Disney+ series Ms. Marvel in June 2022. 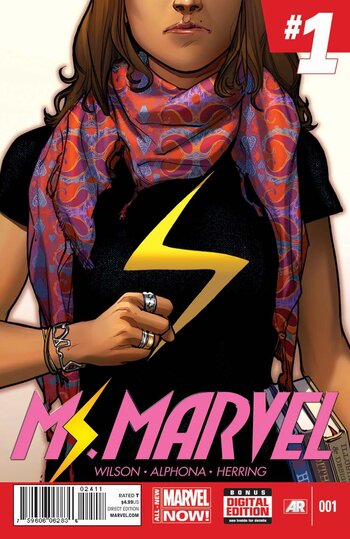 After being exposed to a cloud of Terrigen mist, Kamala Khan discovers her latent inhuman powers and becomes the costumed hero Ms. Marvel, naming herself after her longtime idol. What follows is a tumultuous adjustment period as she learns to juggle the duties of a hero with those of a daughter, a student and a friend.

While this is the first comic arc following Kamala Khan, it's considered to be the third Ms. Marvel arc following the 1977 and 2006 volumes that star Carol Danvers.