Oh, Crap, There Are Fanfics of Us! 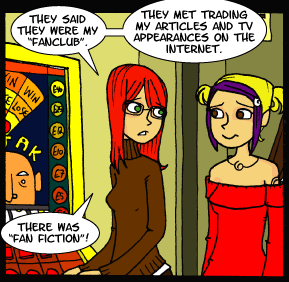 Not everyone thinks it's a good idea.
Dean: There's "Sam-girls" and "Dean-girls" and...what's a "slash fan"?
Sam: As in, "Sam-slash-Dean"...together.
Dean: Like, together together?
Sam: Yeah.
Dean: They do know we're brothers, right?
Sam: Doesn't... seem to matter.
Dean: Aw, come on. That... that's just sick.
— Supernatural, "The Monster At the End of This Book"
Advertisement:

One day, you are surfing the interwebs, and you find a fanfic. This one seems to be about... the characters discovering fanfiction being written about themselves. What is this? Has The Masquerade been snapped in two? Has a hero's Secret Identity been leaked?

This is largely a Fanfic Trope (though not quite Recursive Fanfiction), but can occur in original works. The Ur-Example could be Don Quixote, making it Older Than Steam. This is partially a comedy trope; expect much Squick, raging, and consumption of cleaning products to try to blot out the horrible images wrought by the worst of fics — Rule 34 in particular stands out. If it happens to the creators, not the characters, then it would be Rule 34 – Creator Reactions. Most often becomes a Revenge Fic type 2, with the characters trying to kill bad fanfiction characters (or authors).

A Sub-Trope of Recursive Canon and plays off of the Celebrity Paradox. See Also Who Would Want to Watch Us?. Depending on the characters' reactions and the subject matter of the fic, can also count as Take That, Audience!. In-universe, this may be counted as Real-Person Fic.