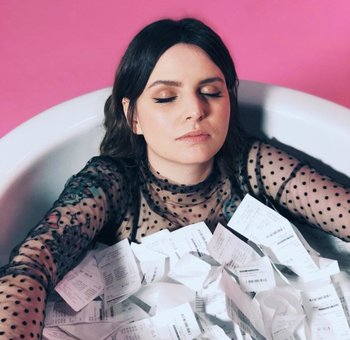 Emma Louise Blackery (born 11 November 1991) is a YouTuber and singer-songwriter from Essex, England.

Although she was known for uploading a mix of vlogs, skits and advice when she was first getting popular, her brand of content interest has touched on a myriad of subjects absorbing everything from makeup hauls to educational videos on North Korea. Her content has also undergone significant change throughout her career, what with her three now-defunct side channels for beauty (boxes of foxes), gaming (BirdyBoots) and vlogging (Vloggery).

Emma's current content generally consists of videos related to her music career, advice videos, and recurring gameplay (mainly of The Sims 4) that revives BirdyBoots as a series instead of a channel. Her sense of humor often entails heavy Self-Deprecation and employs a quite colorful vocabulary.

The reputation that she built talking about issues concerning identity and mental health led to her to write a book that was published in fall 2017 named Feel Good 101, named after the video series in which she gave her stances.

Although it wasn't how many people knew her when she first got famous, Emma actually started out as a musician, as her earliest YouTube channel (emmaforthewin

) was based around covers. She's been building a solid discography since the early 2010s that has gotten her recognition up to being a support act for Busted and having her EP featured front and center in an iPhone X keynote

Her main channel can be found here

Tropes that apply to Emma Blackery: