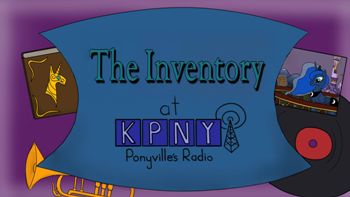 "Welcome to the Inventory here on KPNYRadio, Ponyville's radio. And remember everypony, if you're not listening to KPNY, then you probably aren't listening to the radio!"
— Air Waves at the beginning of each episode.
Advertisement:

KPNYRadio is an fan produced audio drama/Video Review Show dedicated to reviewing the Fan Works created by the Bronies, with a twist.

A group of ponies working at KPNYRadio, Ponyville's radio broadcasting studio (its only one), have made an astonishing discovery. With an experimental radio transmitter called a Quantum Entanglement Dish, they've connected to the internet from another world, the human world. And they've produced a massive amount of media about ponies. KPNYRadio is in desperate need of a new show to bring in the ratings, they need a way to make their discovery known to the world. Thus, they create a show known as "The Inventory" to review and present the Bronies' works to Equestria. But what happens when the Bronies discover them?

KPNYRadio presents and reviews Brony Fan Works through the eyes of the ponies themselves. Unlike many Video Review Shows, the comedy doesn't come from attacking the work being reviewed (reviews are generally respectful to the work in question), but the interactions between the characters. The show can be found on Youtube here

and also on EverFree Network

and the EverFree Radio page can be found here

. A Prequel comic will also be coming soon.

This Audio Play contains examples of the following tropes.