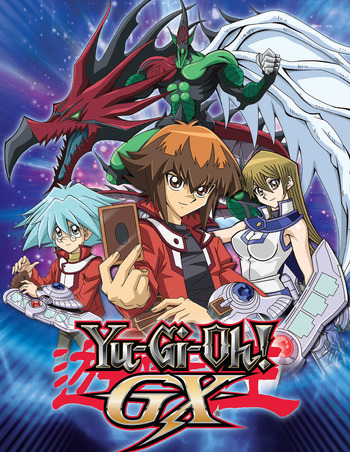 "Generation next!"
"Get your game on!"
Advertisement:

Ten years after Yu-Gi-Oh!, Duel Monsters has skyrocketed in popularity all around the world, to the point where dueling is a professional spectator sport of equal importance to politics and the economy. Like other athletes, duelists start training at a young age, and a good place to start is Seto Kaiba's boarding school, Duel Academy, a high school where kids come to learn how to duel with dreams of becoming the next King of Games.

Not only that, but the game has also gained more importance in dealing with the structure of the universe itself. There are now some Mon-like counter-parts to the cards called Duel Spirits and a Spirit World where these spirits live. Under these circumstances, new Big Bads appear every now and then trying to Take Over the World by making use of these powers.

Yu-Gi-Oh! GX is the story of a group of Duel Academy's students thwarting the plans of these new threats while dealing with the dueling school in general. It particularly focuses on Jaden Yuki, a Slifer Red student who happens to be The Hero, and his friends and rivals.

The anime seasons are as follows:

Season by season, as Story Arcs pass, the cast grows, as different students graduate or arrive and villains are defeated and replaced. The manga, which came after the anime, uses the same characters and the same setting but includes none of the arcs covered in the anime.

The anime has a very Post-Modern tone, blending elements of Gaming and Sports Anime & Manga, Mind Screw, and Deconstructor Fleet. The absurdity of the Serious Business of Duel Monsters is taken Up to Eleven, with entire educational and athletic industries centered around the game. Meanwhile, the plot has serious, painful, and traumatic psychological effects on everyone involved, particularly Jaden, whose psyche collapses under the pressure, power and responsibility he's burdened with. "I've lost a card game! I have no reason to live!" suddenly isn't funny anymore, as it can metaphorically become a Career-Ending Injury, or cause you to literally lose your life. In short, it's a very self-aware Genre-Busting series that plays some tropes absurdly straight and others painfully realistically.

The dub is available on Hulu

and for free on yugioh.com.

It was followed by Yu-Gi-Oh! 5D's. Jaden also appears in the Yu-Gi-Oh!: Bonds Beyond Time movie that teams him up with Yugi and Yusei.

All spoilers will be unmarked ahead. Beware.