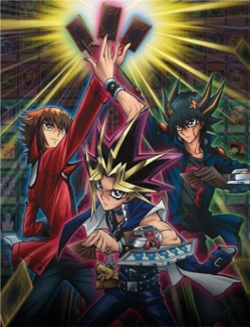 Note the hairstyles.
"Friendship protects the world. Dueling protects the future. This is the power set toward our futures!"
— Tagline of the movie trailer
Advertisement:

A movie special made for the tenth anniversary of the Yu-Gi-Oh! anime. Featuring the three protagonists of the first three series, they fight against a mysterious man, Paradox, who intends to bring the world down the path of destruction. He first steals Yusei's Stardust Dragon, then travels back in time, piling up a good number of questionable acts on his list in order to realize his goal. The three protagonists eventually get to him, challenging him to the ultimate duel.

The movie debuted in Japan on the 23rd of January in 2010. The English version of the movie premiered on February 26th 2011, under the name "Yu-Gi-Oh! 3D Bonds Beyond Time". An encore run of the movie was announced for Japan nationwide on that same date, as part of the Worldwide Anniversary. The Japanese DVD was released on June 16, 2011, with a US release occurring later.