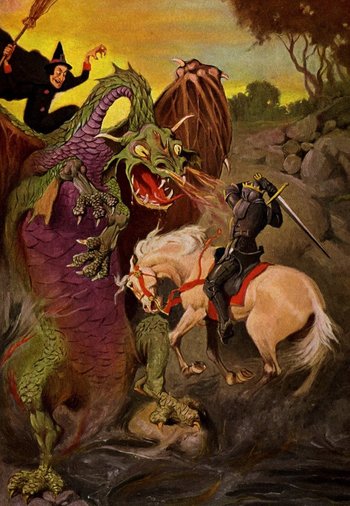 The image of the Knight in Shining Armor standing against the ferocious, ravening dragon is one that's very well-established in Western culture. When a dragon is brought low in a fairytale or fantasy story, it's often slain by a heroic knight; when a knight rides out to slay a monster, this monster is very often a dragon.
Advertisement:

This pairing is firmly rooted in medieval stories and symbology. In European Christianity, serpents and dragons represented satanic powers, a connection ultimately derived from the serpent of Eden, and Satan himself was often depicted as a draconic beast (explictly in the Book of Revelation). Knights were instead associated with a marriage of piousness with the warrior ideal, serving as the archetypal champions of Heaven and righteousness on Earth. The image of a knight slaying a hideous dragon was thus a popular metaphor for good's triumph over evil.

In modern works, this allegorical angle is largely forgotten and the association of knights with God and dragons with Hell is no longer very common, even when these are still respectively portrayed as good or evil. However, as this motif was extremely widespread in European history, it's still common and well-known despite outliving the cultural context that gave it birth.

This trope is particularly common in fairytales and fairytale-inspired settings, but also shows up in other fantasy worlds. It's typically played very straight in traditional fairytales, but is usually played with in modern works. One variant has the moral sides reversed, with a sympathetic dragon and a villainous knight. The extent and nature of this rivalry also changes; it may be a sporadic series of conflicts with little overarching structure, an organized feud, or even a form of Fantastic Racism. Which side holds an advantage is also prone to varying; medieval knights always killed their dragons, but their modern counterparts, no longer favored by cosmic power, find the odds far more in the dragon's favor unless the knight gets clever about things.

"Knight" and "dragon" use fairly specific meanings in this context, knights being the medieval European kind in plate armor and dragons being the Western fire-breathing type.

See also Dragons Prefer Princesses, which this trope is often paired with — the setup of a knight facing a dragon to rescue a kidnapped princess is a fairytale classic. Contrast Dragon Knight, when either the knight is themed around dragons or the dragon is the knight. Also contrast the Dragon Rider, who rides and may fight alongside a dragon instead of against it. If a knight is successful at defeating his foe, he may become The Dragonslayer.