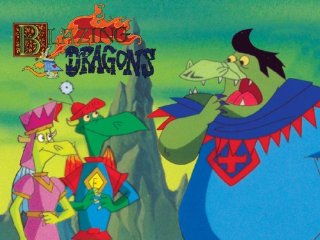 Blazing dragons, we will save the day!
Gather 'round ye brave young knights to hear this famous story
Adventures of the Square Table and of dragon glory...
Advertisement:

Blazing Dragons is a Canadian/British Animated Show that was the brainchild of Monty Python's very own Terry Jones and English screenwriter Gavin Scott, brought to life by Nelvana in association with Carlton Television. Running for 26 episodes in 2 seasons (1996-1998), it originally aired on CITV in Britain, but was also shown on Teletoon in Canada and Toon Disney in the United States.

A parody of Arthurian legends, the series centers around the dragon kingdom of Camelhot, ruled by King Allfire, his wife Queen Griddle, and his daughter (Griddle's stepdaughter) Princess Flame. Allfire leads the Knights of the Square Table, which is made up of Sir Loungelot, Sir Blaze (Griddle's son), Sir Burnevere, Sir Galahot, and Sir Hotbreath. While Allfire is a good (if foolish) king, his knights, especially Loungelot, are varying degrees of lazy, greedy, and incompetent. In fact, the only halfway competent warrior in the kingdom is Loungelot's squire Flicker, a genius inventor far more virtuous than the knights he idolizes - something that nobody besides Princess Flame (who Flicker has feelings for) seems to notice or appreciate.

In most episodes, King Allfire and the Knights of the Square Table (more often than not with the help of Squire Flicker and Princess Flame) battle their mortal enemy, Dread Count Geoffrey de Bouillon, Oppressor Par Excellence of the Poor and Weak, who rules an impoverished neighboring kingdom of humans from Castle Threadbare. With the help of his henchmen, which include Evil Knights 1, 2 and 3, the witch Merle, and his personal spy to the dragons' kingdom (a man in a ludicrously cheap dragon costume), Count Geoffrey constantly schemes to take over Camelhot and oust Allfire from power. Fortunately, for our scaly, fire-breathing heroes in Camelhot, Count Geoffrey and his minions are, if anything, just as inept as most of the dragons are.

The second season made a few changes to the show, with perhaps the most obvious being a change in animation style that gave the characters thicker outlines and episodes being change from full 22-minute adventures to a Two Shorts format. Additionally, a few of the characters were either removed or Demoted to Extra, while Count Geoffrey and Princess Flame were redesigned to fit the new art direction. However, fans of the show generally agree that despite these alterations, the writing remained as sharp and witty as before.

A Licensed Game was also released for the PlayStation and Sega Saturn, featuring entirely different character designs and American voice actors replacing the show's Canadian cast (although Terry Jones provided some voice work as well). It's a point-and-click adventure game, in which the player controls Flicker and helps him participate in a knight tournament so that he may win Princess Flame's hand in marriage. However, things are complicated by the evil Sir George (basically the game's version of Count Geoffrey) infiltrating the tournament as part of a scheme to take over Camelhot and marry Princess Flame.

Tropes used in the cartoon:

When Sir Loungelot makes the mistake of crossing a witch, he gets turned into a newt, leaving Squire Flicker to figure out how to solve the mess.

When Sir Loungelot makes the mistake of crossing a witch, he gets turned into a newt, leaving Squire Flicker to figure out how to solve the mess.