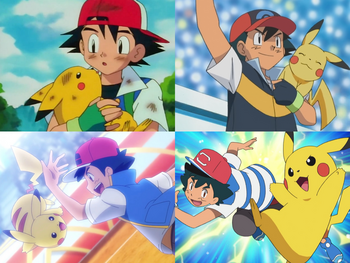 So, you have collectible Mons and might be able to catch them all? But there is only one or maybe two that take all the spotlights from all the others or hang around with you the most? Is the bond between you and your signature mon stronger than with any of your other mons? Congratulations, you have a Signature Mon.

Signature mons are often one of the most iconic character "traits" a person can have. Their relationship might get a lot of focus. Maybe they symbolize their strength or hope. For villains, they may symbolize their power and usually appear as their final trump card.

But you have to keep following things in mind if you want to figure out what a Signature Mon is:

A Signature Mon doesn't have to fit all criterias above (the first criterium is a must, though), but it is important that they do fit in several of these.

Compare Series Mascot, if a mon happens to be the iconic character of an entire franchise.