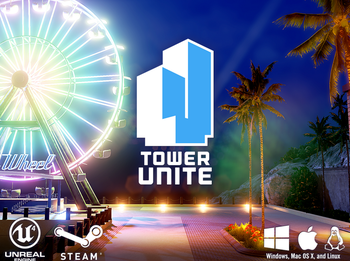 Tower Unite is the successor to what was once GMod Tower developed by PixelTail Games in Unreal Engine 4, allowing for more diversity in terms of game development compared to the Source Engine and Garry's Mod's .lua scripting.
Advertisement:

The development started with an unsuccessful Kickstarter campaign, the failure

of which led to a successful

Indie Gogo campaign, and a release

through Steam Early Access on April 8th, 2016. It remains in active development today, and you can see the extent of their roadmap here

The current game functions just like GMod Tower, but with servers being handled differently. Users can now host their own servers in the game modes and access their condos without a need for a Lobby server with open condos in the tower while a Lobby server will require a dedicated server to conform to a certain standard in order for players to earn both Units and for items earned therein to be considered "genuine" when inspecting them. A lot of content from GMod Tower will be ported over in some (lawyer friendly) state such as the new currency known as Units and other returning features such as the theater.

The tropes in Tower Unite (Note that many tropes in GMod Tower apply here as well):