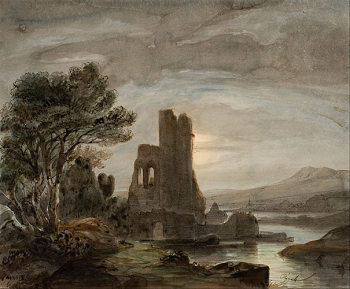 "My fate is to live among varied and confusing storms. But for you perhaps, if as I hope and wish you will live long after me, there will follow a better age. This sleep of forgetfulness will not last for ever. When the darkness has been dispersed, our descendants can come again in the former pure radiance."
— Petrarch
Advertisement:

A time of anarchy and chaos (roughly 500 - 1000 AD), when people were disease-ridden and covered with filth, unless one happened to be king... at least, if you believe what ''Hollywood'' says about them — according to real modern historians this is a load of cobblers based primarily on the fact that we don't have many documents from (approximately) the first half of that time, and Renaissance figures were eager to dismiss everything between them and Ancient Grome (which they claimed they were heirs to) as pure garbage and not worth discussing.

In Hollywood Land, however, this was a time of muck and more muck. The cleanest—and most well-known—figure of this period generally ends up being Arthur, King (...ish) of the Britons, who had a round table, around which sat his band of noble and chivalrous knights blokes with big swords who fell in love with fair princesses and romanced them platonically from afar. Many of these knights proved not so noble and chivalrous once left to their own devices.note Many medieval knights were teenagers that worked for their lord as hired muscle, fighting wars and behaving more like modern gang members than the romantic accounts would have you believe. Since most accounts of Arthur were written centuries after he supposedly lived, and featured fashion and architecture from the time they were written, many Hollywood 'historians' lump him in with The High Middle Ages (but hey, since when have they been sticklers for accuracy?).

This period heralded the fall and division of the Western Roman Empire (the Eastern half was able to survive as the Byzantine Empire... which was never called 'Byzantine' until a century after it fell, by Renaissance figures wanting to paint themselves as heirs to Ancient Grome. Starting to see a pattern yet?), and the rise of monasticism in Europe.

Hollywood monks are pious men, clad in long brown robes, with rosaries and tonsure haircuts. They spend their days chanting and dipping feathered quills into inkwells and scribbling strange script into large books by candlelight. That is, when they're not out chasing lusty, busty tavern wenches. Hollywood monks don't take that whole "celibacy" thing all that seriously. Neither, in fact, did the regular clergy; celibacy did not become a requirement of the priesthood until very late in the Middle Ages. It was, however, mandated in nearly every set of monastic rules, including those of Benedict.

It was also a time of interesting contrasts: during this period, Christian and Pagan folklore and traditions were syncretized in the minds of the public, which gave rise to some of the most famous mythologies and legends of the Middle Ages, such as Beowulf, Siegfried, and the aforementioned King Arthur.

The term “Dark Ages” only makes sense if you understand the technical definition of the word “history”, which is: “The study of stuff people wrote about themselves back in the day.” The Dark Ages were dark not because they were Darker and Edgier, or because there was a shortage of candles, but because for the first half of the period (roughly), relatively few of their writings have survived to the present day - and even that varied depending on time and place. Nevertheless, History was somewhat in the dark about what things were like. We cannot tell for certain whether the Dark Ages were darker and edgier than the eras that came before and after, though the evidence strongly suggests not - which is not to say that it was perfect, as the dismantling of the Western Roman Empire left a vacuum of power that a number of players struggled to fill. In fact, there is absolutely no evidence at all that there was any kind of 'technological Dark Age', rather the evidence favors continued gradual development.

According to several historians the reason we have writings from Pliny and other earlier writers at all is because they were dutifully copied by monks. The reason we tend to look down on this period is because in the Renaissance there was a massive upsurge in interest in ancient Greek, Roman, and Egyptian culture and a great deal of belittlement and scorn for the previous millennium, including from Petrarch, provider of our page quote and coiner of the term. Part of the reason that we have so few historical documents from the 'Dark Ages' is because many of them were destroyed in the Renaissance, since they were considered worthless. There was also outright systematic destruction of many great Gothic buildings from the Middle Ages (aside from ones that were still under construction, like the Cologne Cathedral - cathedrals take a long time to build). From a historical viewpoint it would be more accurate to pinpoint this age from 661 (when the Europeans lost contact with Syria and Egypt due to Muslim invasions) to about 1100 (when the Crusades recovered lost information from the Classical Era). We know what happened during those times though, and it is for whatever reason a rather touchy subject, so fiction writers do not touch it.

Popular tropes for works set in this time period are: