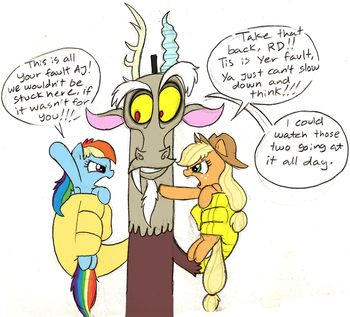 He's living up to his name... Art by mickeymonster

As the old saying goes, "Can't we all just get along?"

Because Humans Are Bastards, this means that they all hate each others' guts, and that's one of the things to make a sure-fire Crapsack World. Here are common tropes about characters who don't get along at all.

See Frenemy Tropes if it combines enmity with friendship.

Nothing to do with Discord the chat client

These tropes do not like each other at all: