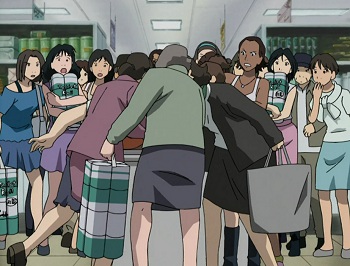 Another day at the supermarket, it looks like...
"TOUCH THOSE THAI SILK CURTAINS AND I'LL TURN ONE OF THOSE HOOP EARRINGS INTO A SEPTUM RING!"
— Chi Chi, DBZ Abridged: Super 13
Advertisement:

A brawl breaks out between customers in a store over items that are in limited supply.

In comedic works, this is likely due to a big sale offering great deals, or due to an item that absolutely everyone simply has to have for Christmas or a Christmas-like holiday whose true meaning has been cheapened by commercialism. In more serious situations, it can be the result of mobs desperate to hoard survival materials before an impending disaster (usually an apocalypse, a storm, or if there's a violent protest that leads to looting), though the "hoarding survival materials for a disaster" scenario can also be Played for Laughs, as seen in It's Always Sunny in Philadelphia and The Simpsons. It can also show up in advertisements, where customers are so eager to get their hands on the advertised product that they'll fight each other over it.

This can sadly be Truth in Television, as there have been cases of people being injured or even killed at large sales events such as Black Friday.

Nobody stands between Monica and her perfect wedding dress!

Nobody stands between Monica and her perfect wedding dress!