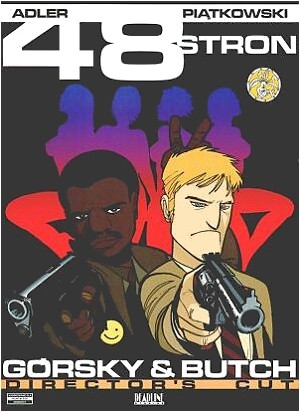 Górsky & Butch is a Polish comic book made by Robert Adler and Tobiasz Piątkowski. It tells a story of a duo of policemen working to find some sense in their comic... a rather futile effort.
Advertisement:

Much like Mel Brooks' movies, the series uses the plot as an excuse to spoof the hell out of whatever happens to stand in its way. Also, because of the main point of the plot, it has no fourth wall.

The comic consists of three books and a prequel, "Golota vs Predator". There was no definite ending to the series, but the last book showed symptoms of the authors running out of ideas. It is currently unknown whether new books will be made.

Sadly, Górsky and Butch is almost unknown outside Poland, being almost impossible to translate. This is mostly due to Poland-specific cultural referrences. Also, the comic is a Hurricane of Puns, some of which directly influence the plot. If the pun is untranslatable, the scene will make no sense. (For example, the whole Aliens parody has the Marines fight against sheep, because the movie they are in is an illegal copy with a translation full of spelling errors - Polish words for alien (obcy) and sheep (owcy) are very similiar.)

The tropes invoked by this comic include: