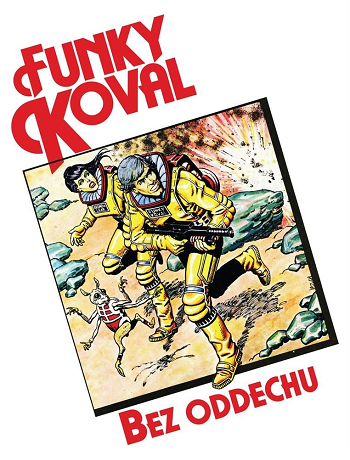 Funky Koval is a Polish science fiction comic book, created in the 1980s by writers Jacek Rodek and Maciej Parowski and artist Bogusław Polch (who also illustrated The Witcher comic books). The eponymous hero, a detective working for the Universs Agency, gets tangled in an interplanetary political conflict involving two alien races: the Droll and the Ankuz.
Advertisement:

Started as a strip in the magazine "Fantastyka" in 1982, the comic was later moved to a book format, with four albums being released: "Bez Oddechu" ("Without Rest", 1987), "Sam Przeciw Wszystkim" ("Alone Against All", 1988), "Wbrew Sobie" ("Against Oneself", 1992) and "Wrogie Przejęcie" ("Hostile Takeover", 2011). In 2011, it was announced that the production company Astrablu would film an adaptation of the first book, but the film still remains in Development Hell.