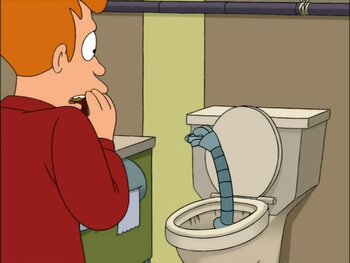 Bender is heading out.
"If you're trying to flush yourself down the toilet, it won't work. Trust me, I've tried."
— Amethyst to Peridot, Steven Universe
Advertisement:

There are plenty of ways to get from point A to point B. But what do you do when the doors are all locked or guarded, the windows are barred, and you need a quick and easy way in or out? Just use the toilet, the john, the commode, the can, the head, or even the crapper. Toilet Teleportation is when a character needs to escape or sneak in and flushes himself down a toilet, to reappear in another part of the plumbing network. It's (almost) always Played for Laughs. If it doesn't work, expect someone to ask why anyone would think it would.

See also Bathroom Break-Out. A subtrope of Fun with Flushing.