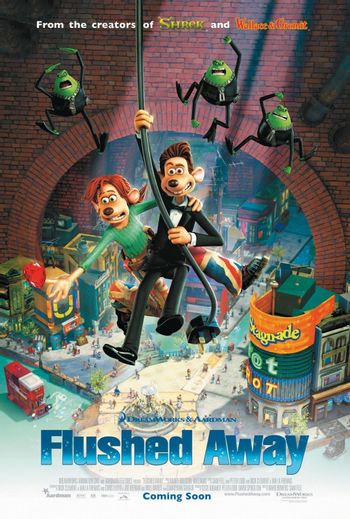 "You can get yourself out of here, and you will. Never forget."
Flushed Away (2006) is the third and final collaboration between DreamWorks Animation and Aardman Animations, using CGI to replicate Aardman's trademark Claymation style of animation.

A pet fancy rat called Roddy St. James (voiced by Hugh Jackman), after a mishap with a sewer rat named Sid (Shane Richie), ends up flushed down from his swank Kensington home into the underworld of vermin beneath London. Desperate to get home, he encounters Rita (Kate Winslet), who is on the run from a crime lord called The Toad (Ian McKellen).