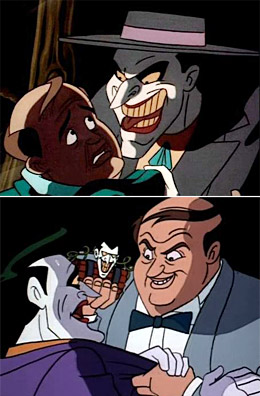 Bookends of the first and last acts of the Batman: The Animated Series episode "Joker's Favor".
Advertisement:

A Story Arc in which two characters or groups slowly, and involuntarily, swap their positions in life. These positions are usually social (who has high-status, who is popular), economic (who is rich), and most of all, moral — who is decent and who is a ruthless bastard. The swapping often leads to escalation — the new poor person is poorer than the old one was, or the new amoral one is much nastier than the old one was.

The pathos from the Hourglass Plot comes from how neither character learns from the situation — they act just the same to each other as they did before, but with roles reversed. Particularly cruel shows will create an infinite-loop Hourglass Plot, where two hostile characters keep swapping positions and treating each other as badly as ever. In rare cases, such plots will involve the characters barely interacting with each other... a pure comparison of one person's rise to another person's fall.

Lucky characters will get a "Not So Different" Remark moment and actually learn from it. Compare: Prince and Pauper, Perspective Reversal, Full-Circle Revolution, Swapped Roles, Became Their Own Antithesis for when there's only one character and now corresponding switch, "Freaky Friday" Flip for an especially literal case, Just the Introduction to the Opposites for when there is no justification for it, and Perspective Flip for when it's a retcon instead of a plot development. Compare and contrast: If You Kill Him, You Will Be Just Like Him! and You Kill It, You Bought It. Caretaker Reversal is a subtrope.

Since explaining examples of this trope requires full knowledge of a story's plot, beware of unmarked spoilers.