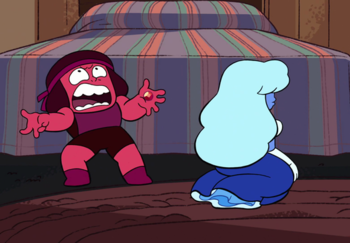 "It's FUSION, Sapphire! What's more personal to us than fusion?"
Advertisement:

Pearl returns via warp pad, and when greeted by Steven and asked where she'd been, she says that she's been looking for Peridot for the last few days, as a way to atone to Garnet for lying. Just then, Garnet enters. Pearl tells Garnet that she's been looking for Peridot and asks for ideas about where she might be, but Garnet's still not speaking to her, and just walks past.

Just then, Greg interrupts, asking "Who wants to go on a road trip?"

He quickly realizes that this was probably not the time for that, but Garnet asks him to continue. He explains that he has to drive over to the next state, Keystone (as in the state called Keystone, not the Keystone State), to buy car wash brushes from a guy he met on the internet. Steven comments that he doesn't like the brushes as "they feel weird on your fur". But he does like the idea of staying at a motel with his dad, and going to the nearby Best Diner in the World. Garnet declares that she's also coming.

Greg and Steven are excited for the road trip, but Garnet is not sharing the mood. Her obvious state of Tranquil Fury definitely worries Greg, but Steven is still hopeful that it'll be fun. They drive to Keystone and arrive at the motel pretty late. Steven is still incredibly excited about staying in the motel.

Steven: I'm gonna swim in the pool, order a movie, get free ice! It's gonna be great! (jumps onto one of the beds)
Greg: Not before we check for bedbugs, it isn't!

Garnet is still furious, and she has a visible frown when she brings in Greg and Steven's stuff (including the Cheeseburger Backpack). Greg gets a call, and asks Garnet to hold the fort while he goes to meet the vendor. Garnet's hands are shaking and moving independently, but she manages to give him a thumbs-up, and he leaves the motel.

Steven is happy, and asks Garnet to bounce on the beds with him, but she's busy arguing with herself. Soon afterwards, the conflicted emotions Garnet's feeling causes Ruby and Sapphire to literally blow a fuse. They continue their argument once they're separated. Ruby is furious at Pearl for tricking them and doesn't want to forgive her, while Sapphire insists that they've got to move past it and forgive her.

Ruby: She lied to us so we'd form Sardonyx! She... tricked us. Don't you feel used?
Sapphire: You're choosing to take it personally.
Ruby: It's FUSION, Sapphire! What's more personal to us than fusion?

Sapphire tells Ruby that while she's also angry at Pearl (while maintaining a monotone voice), the sooner they forgive Pearl, the better it will be for everyone. Ruby tells her: "You're not as above this as you think you are!"

Sapphire: Yes. I am.

Ruby starts using Angrish and pacing. When Sapphire tells her that she can't stay angry at Pearl forever, her response is "Wanna bet?". Sapphire points out that her heat powers, acting up in response to her anger, are burning through the carpet. and Ruby runs outside.

Steven goes out to use the pool and sees Ruby pacing around beside it, scorching the cement around her feet. When Steven asks her if she wants to get in the pool with him, she begins ranting about how it seems that Sapphire doesn't even care about the misuse of fusion and about how, as Garnet, they're always supposed to be mature and "the bigger gem". Ruby wants to cut loose for once and express her anger at Pearl. Steven invites her to cool down in the pool.

Ruby: (while literally fuming) I don't need to cool down.

It's extremely cold in there. The source of the chill is Sapphire, who says that she's fine. Steven asks her if she'd like to watch TV with him, and she acquiesces. When he realizes he doesn't know which shows are on which channels, he asks Sapphire to use her future vision to find out which channel he'd like best. Steven puts it on, and bundles up in his blanket as Sapphire's powers freeze the room even further.

Sapphire seems to be taking the whole argument thing rather calmly. She says that talking to Ruby won't help, but in the end, Ruby will realize that she can't stay mad at either Pearl or Sapphire forever, and then everything will be made up. It's inevitable that the argument will end—Ruby's just letting her emotions get the better of her. A shivering Steven asks Sapphire if she's doing the same thing. Sapphire denies it, while her powers spread ice around her. Steven goes to the bathroom, only to find out that the toilet's frozen.

Sapphire: Such is fate.
Steven: Am I fated to pee outside on the grass too?
Sapphire: Yes.

Steven leaves the motel room just as Greg pulls up in his van. Greg, who doesn't know about what happened in the meantime, is still happy, and he's brought pizza for him and Steven. Steven is cheered up a little, but he can't summon the enthusiasm he had at the beginning of the trip. Greg's trip went well—the guy wasn't an axe murderer, at least. He wonders why Steven's out in his bathing suit and where Garnet was. He peeks into the motel room/freezer and finds Sapphire.

Sapphire: He's not going to like that it's square.

Greg's not surprised to see her, and asks Steven where the "other one" was. She's still pacing around in the bottom of the pool—or at least, what used to be the pool, as it's all boiled away. Greg is still optimistic that they could have a good time, despite the serious conflict between Ruby and Sapphire. He opens the pizza box—and the pizza turns out to be square. Just as Sapphire predicted, Steven doesn't like that.

Steven asks why Ruby and Sapphire don't just make up, and Greg replies that sometimes people who love each other can hurt each other's feelings, and that it's best to give them some space. Steven, however, thinks that they could work it out if they just talked to each other. Greg tries to reassure him that everything would be better in the morning, and they'd all go to the Best Diner in the World for breakfast. Steven wonders if that would help, and Greg says that "there's nothing like a little breakfast to bring people together".

Come next morning, and it turns out that the Best Diner in the World is actually the name of the diner. Ruby is still angry, and when she doesn't eat her food, Greg asks if she's not hungry. Steven reminds him that gems don't need to eat, but he says that Garnet still liked to eat sometimes.

Greg is uncomfortable, but tries to lighten the mood with a comment on how good the food was. It doesn't really work, and Ruby starts shaking the table in her anger. Sapphire points it out, and Ruby comments that she's surprised Sapphire could feel anything at all. Sapphire says that she didn't need to feel it, as she could see it.

Ruby: Everything's...just so crystal. clear. for you, isn't it?

She starts shaking the table even harder, and Greg and Steven only just manage to save their food. Sapphire reassures them that Ruby will eventually burn herself out, and Ruby retorts: "That's what you think! I am an eternal flame, baby!". She then summons her weapon (a gauntlet) and punches the table, flipping it over. Steven is sad—and angry. Greg tries to salvage the situation by saying that they could still bag the food up to-go, but Steven is just done with the whole thing. He throws his plate on the ground and walks out of the diner.

This catches both Ruby and Sapphire's attention, and stops their argument in its tracks. They both follow Steven out of the diner, and he gives a rant of his own.

Steven: I was so happy when Garnet said she was gonna come on this trip with me and dad. Home's been awful. Here's been awful. I thought you wanted to have a fun time, but everyone's been acting awful too! It... it just came with us! I don't understand! Is it... is it me?

This completely horrifies Ruby and Sapphire, who now realize that their argument has utterly wrecked Steven's vacation. Ruby hastily reassures him that it's not the case, and tells him that it was all them. Sapphire then realizes something worse: They made Steven feel like it was his fault. She realizes what she did wrong; her future vision meant that she only saw the time when the issues were already solved, and forgot that they still existed in the present.

Sapphire: No wonder you think I don't care!

Sapphire begins crying, and Ruby tries to comfort her by taking the blame. Ruby's problem was that she was so focused on her present problems and feelings that she never looked for, and indeed actively rejected, any solution. Ruby apologizes to Sapphire and brushes her bangs aside, revealing that Sapphire is a cyclops. Sapphire asks if Ruby really thought that she wasn't upset by what happened, as she was just trying to do the right thing.

Ruby: You know what's nice about being split up?
Sapphire: What?
Ruby: I get to look at you.

Now that they're made up, they return to being Sickeningly Sweethearts. Sapphire starts laughing, and Ruby calls her "Laughy Sapphy". Ruby picks Sapphire up bridal-style, and they kiss. Greg comes over, having paid for the meal (and the damage to the booth), and asks Steven if he wants to go home. But before Steven can say anything, Ruby and Sapphire re-fuse. Garnet says that they're not going before they get their free ice.

The group returns home, Steven with a bag of free ice in his arms.

Pearl: You look like you all had fun.
Steven: Yeah! It all worked out!

Pearl greets Garnet, who responds with "Not now" and walks away. She hasn't forgiven Pearl yet, but at least she's speaking to Pearl again. Steven wonders if they can go back. Greg tells him that they might someday—but not to that diner.

We Iris Out on Greg's face.

Garnet is NOT in the most stable mentality right now.

Garnet is NOT in the most stable mentality right now.