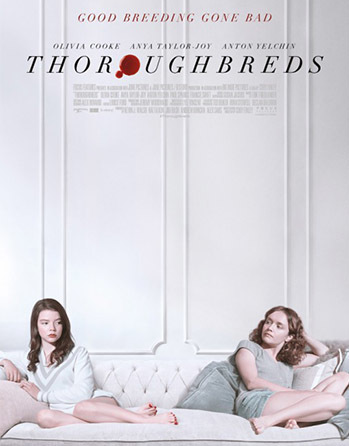 Thoroughbreds is a Black Comedy thriller starring Olivia Cooke and Anya Taylor-Joy, and written and directed by Cory Finley (in his directorial debut.) It was actually filmed in 2016 and premiered at Sundance in 2017, but did not get a theatrical release until March 2018.

The film's plot involves a couple of upper class teenagers, Amanda and Lily. The pair used to be friends when they were younger, but grew apart over time. Amanda is an emotionless sociopath, while Lily is overly emotional but the more socially and academically gifted of the two. They begin hanging out again initially so Lily can tutor Amanda, but soon develop a plot to murder Lily's emotionally abusive stepfather Mark (Paul Sparks).

The film is notable for being Anton Yelchin's last movie, as he died in a freak auto-related accident exactly two weeks after filming.