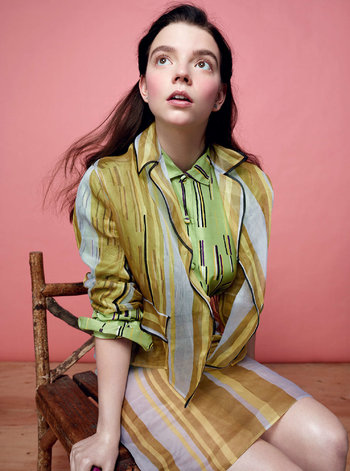 Anya-Josephine Marie Taylor-Joy (born April 16, 1996) is an American-Argentine-British actress.note On Saturday Night Live, she joked that her nationality is "Fashion Week." She has US citizenship by birth, and British citizenship from her parents, but sources conflict about whether or not she has Argentine citzenship too.

She was born in Miami, Florida when her parents were on holiday there. On her father's side, she has Scottish and Argentine heritage. From her mother, English and Spanish. She grew up living in Buenos Aires until age six when her family moved to London. Because of this, she speaks Spanish fluently along with English. According to her, it was difficult to fit in both places, and she was often bullied.

She is known for her frequent roles in horror films and thrillers; she starred as the protagonist in The VVitch, the title role in Morgan, and Casey Cooke in M. Night Shyamalan's Split and Glass, though her career has very much diversified since.

She garnered a great deal of critical acclaim in 2020 for her role as chess prodigy Beth Harmon in the Netflix miniseries The Queen's Gambit, winning a Golden Globe Award for it in 2021. She's also been cast as a younger Furiosa in a Mad Max: Fury Road prequel project.