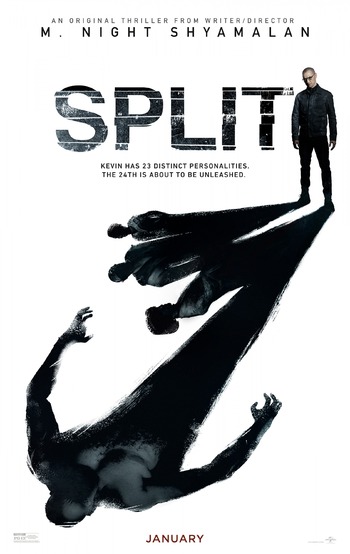 "There must be limits to what a human being can become."
"The Beast is a sentient creature who represents the highest form of humans' evolution. He believes the time of ordinary humanity is over. I hope this makes you feel calm. You will be in the presence of something greater."
— Kevin (Dennis)
Advertisement:

Teenager Casey Cooke (Taylor-Joy) and two classmates are abducted and held prisoner by Kevin (McAvoy), a mentally-ill man with no less than 23 personalities, some more dangerous than others. As the girls seek escape, Kevin has meetings with his psychiatrist Dr. Fletcher (Buckley) and finds his multiple identities destabilizing further and approaching war with one another. To top it all off, a 24th personality is apparently emerging...

Being a Shyamalan film, the movie has dozens of twists and turns along with his iconic Mandatory Twist Ending. A sequel came out in January 2019, but to say anything about it on this page would give away said Twist Ending.

"He'll protect us. Look at what he can do. Let him show the world how powerful we can be."
Feedback