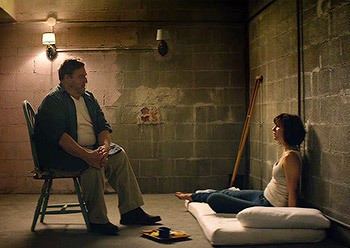 "You're lucky to be here at all. And my generosity only extends so far."
Advertisement:

We've all seen it before: a female character is abducted and held against her will underground—usually inside a bunker or Torture Cellar. This trope is pervasive and sinister, appearing across genres in everything from comedy to horror, drama, thriller and science fiction. While this trope is fairly specific, it has a large number of variants; for instance, the woman need not necessarily be trapped in a bunker—anything inescapable underground does the trick.

In addition, a man need not necessarily be but is usually the sole trapping force of the Bunker Woman; the trapping man may have a Survivalist Stash or just be Crazy-Prepared for The End of the World as We Know It, he may even lead a Doomsday Cult, either way he likely considers the Bunker Woman an object to be collected for future use. Occasionally, the man considers himself the savior of the Bunker Woman. Lastly, while this trope is generally tied closely to the major narrative of a work of fiction, it also sometimes appears in passing within TV and film.

Compare Disposable Woman and Damsel in Distress, in which the woman plays a peripheral role inciting a male lead to action. In contrast, the Bunker Woman is usually the main character, and it is her struggle as she attempts to escape her captor that twistedly entertains.

Bunker Woman is distinct from Madwoman in the Attic, for here the captive is generally not unfit for society and is a more or less ordinary person who just happens to have been kidnapped, and from Secret Squatter, where a person is living in a house knowingly, but unknown to the homeowners.

Can be a Sub-Trope of Women Are Delicate, though she may end up defying that trope in her escape.