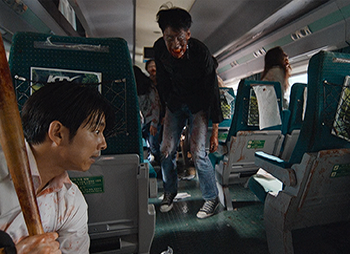 Nothing says "fun, relaxing train ride" like a Zombie Apocalypse.
"Leela, I've made a terrible mistake. I thought I'd locked the enemy out. Instead, I've locked it in. With us."
— The Doctor, Doctor Who, "Horror of Fang Rock"
Advertisement:

A basic, classic horror plot that follows a simple formula.

Some characters are stuck in a partly constricted space (such as a building or large vehicle), while menaced by some threat, usually a vicious predator that is hunting them. The cast avoids the predator to the best of their ability while trying to concoct a method of resistance and/or escape. If initially more than a few people, their number dwindles as they are devoured or otherwise disposed of one after another, until such time as the predator is defeated or they manage to engineer an exit. The essence of the trope is the immediacy of the conflict between victims and predator. The victims have no chance to flee or withdraw from the situation to form an ideal plan. With every moment, the risk of an encounter with the predator is mounting. Any plans need to be thought up fast, and every loss reduces the victims' chances permanently.

Circumstances ensure that the characters can't simply leave the situation. If they're in a structure, it will be somehow isolated or surrounded by a hazard. The most common choices are a space station or an underwater habitat, where the environment around the enclosed space is also dangerous without proper protection. A vehicle will usually be something equally enclosed and inescapable, like a plane, submarine, boat, or spaceship. If a land vehicle, it will have to be traveling through an inhospitable area, like a desert. The area has to be of sufficient size to ensure some kind of story can happen, so a single room of a house or a four-door car won't work. Similarly, the space can't be so large that the prey can just keep running away, like a wide-open field.

The result is a type of Closed Circle, specifically an Enclosed Space, but rather than a mysterious killer, the cast faces an immediately identifiable and constantly present danger.

The isolation creates an environment with a lot of potentials. There are cubbies, alcoves, and storage areas to hide in; corridors to run through; air vents to sneak through; open, communal areas that create the illusion of safety. There is also maintenance equipment that can be used as an Improvised Weapon; devices and instruments that can be reconfigured as traps. Any of these can be used by the protagonists or the creature in their perpetual game of cat-and-mouse.

The use of a vehicle adds further complications. If operational, it imposes a time limit on the story, as it will (hypothetically) eventually carry everyone to safety; thus, the protagonists in principle need only survive long enough for it to arrive. If not operational, getting it running will be the major goal for at least the first act. This, in turn, creates an extra level of threat, as the monster can, if unable to reach the protagonists, still screw them over by wrecking their transportation.

Compare Shark Pool and Fed to the Beast, where the villain intentionally puts the hero in a confined space with a monster. Often coincides with Exploring the Evil Lair. Contrast Alone with the Psycho. "Die Hard" on an X is the inversion of this, where the "monster" is the hero; a common joke among fans of Alien is that, for a xenomorph audience, that film would be Die Hard on a space freighter.