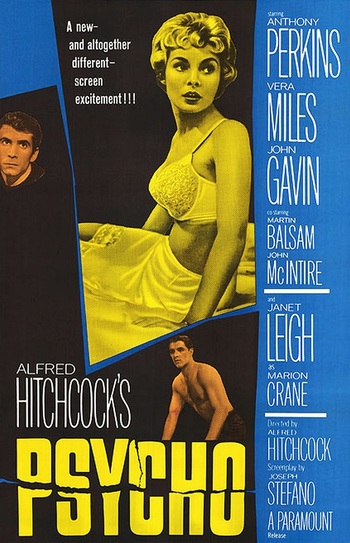 "It is absolutely required that you see Psycho from the very beginning!"
"A boy's best friend is his mother."
— Norman Bates
Advertisement:

Probably the best-known film to be directed by Alfred Hitchcock, Psycho (1960) is a psychological thriller film credited as the Ur-Example of the Slasher Movie genre.note  Notably, John Carpenter's Halloween (1978), the film often called "the original slasher movie", includes multiple explicit references to Psycho. One of its two leads is even played by Janet Leigh's daughter, and the other is named after Marion's lover. Hitchcock himself said he took inspiration from Les Diaboliques, even aping that film's meta by insisting, in a William Castle-esque ballyhoo, that 1) no one be allowed to enter after the film has begun, and 2) viewers avoid spoiling the ending to others.

The story, adapted by Hitchcock and screenwriter Joseph Stefanonote  who would later make produce the sci-fi anothology series, The Outer Limits (1963) from Robert Bloch's novel published the year before, has not one but two major plot twists; at the time, Hitchcock went to great lengths to keep them a secret (including one ad pleading, "Don't give away the ending — it's the only one we have"), but these days, most people know about both thanks to Pop-Cultural Osmosis, even if they know nothing else about the film.

Psycho starts out as a Film Noir-style crime thriller: Marion Crane (Janet Leigh), a secretary at a Phoenix real estate office, embezzles a large amount of cash from her employer's clientnote US$ 40,000, which adjusted for inflation would be the equivalent of approx. US$ 350,000 in 2020 money and sets off for Fairvale, California, where she plans to hook up with her lover and start a new life. After two days of driving — plus an unnerving encounter with a highway patrolman and a hasty exchange of cars — Marion stops for the night at the desolate, out-of-the-way Bates Motel, run by nervous Momma's Boy Norman Bates (Anthony Perkins), who lives with his domineering mother in an ominous Victorian house behind the motel.

Twist #1: As Marion takes a shower in her motel room, a dimly-glimpsed, knife-wielding maniac suddenly appears and brutally stabs her to death in the film's most famous and oft-parodied scene.

After that, Psycho changes gears into something more along the lines of a combination mystery and Psychological Horror story, while retaining a few noir elements. The rest of the film follows the investigation into Marion's disappearance, first by a private detective (Martin Balsam) hired to recover the money she stole, and then, after he also falls victim to the knife-wielding psycho, by Marion's lover (John Gavin) and her sister (Vera Miles). It appears that Norman's mother may be killing off any woman he shows an interest in; the local sheriff (John McIntire) mentions two other unsolved disappearances of young women in the area. This leads into...

Twist #2: Norman's mother has been dead for years. Her domination is now entirely in his head, a Split Personality sharing the persona of his mother. It is Norman, under the influence of this personality, who has been committing the murders. However, the Mrs. Bates personality insists that Norman is the real killer, because she can't move.

Being such a popular movie, it naturally spawned three sequels (one being made-for-TV) that few know exist. Anthony Perkins reprised his role and even directed the third movie. Despite Sequelitis naturally setting in, the sequels are a lot better than one would expect, largely due to Perkins’ performance as Norman Bates:

There was also an unrelated 1987 TV movie, Bates Motel, involving a man named Alex (Bud Cort) who'd befriended Norman while being institutionalized with him, and on his release learns that the now-deceased Norman has willed the motel to him.

In 1993 and 1994, Universal Studios' Halloween Horror Nights had a haunted house based on the movie called The Psycho Path Maze, featuring props from the filming of Psycho IV. It was followed by Psycho: Through the Mind of Norman Bates in 1999 and Psycho Path: The Return of Norman Bates in 2006.

In 1998, Gus Van Sant directed a nearly Shot-for-Shot Remake starring Vince Vaughn as Norman and Anne Heche as Marion. To the extent that it was the same as the original, it was widely regarded as pointless, and to the extent that it was different, it was widely regarded as inferior (probably the most notable difference being a shot of Norman masturbating and a gratuitous scene of Viggo Mortensen's butt). But the fact that somebody thought it might be a good idea suggests what a big place the original film has in the public memory. Indeed, Van Sant may have been doing us a favor: in his own words, he did it "so no-one else would have to". Look at the trend of horror-film remakes from the oughts (The Amityville Horror (2005), The Texas Chainsaw Massacre (2003), Halloween (2007), The Hitcher, Friday the 13th (2009), and even a new version of Hitchcock's own The Birds came close to getting made at one point), and you'll notice he was ahead of the game in preventing Platinum Dunes from touching this one. Of course, he could just be backpedaling.

The 2012 film Hitchcock is based on Stephen Rebello's non-fiction book Alfred Hitchcock and the Making of Psycho and deals with the filming of Psycho.

In 2013, a TV series, also titled Bates Motel, and a prequel (albeit set in the modern day) debuted on the A&E Network.

The shower scene is now part of movie culture and the music used, along with the film itself, is used in many scholarly courses as prime examples of their chosen subject. It's also Trope Namer for "Psycho" Strings and "Psycho" Shower Murder Parody.