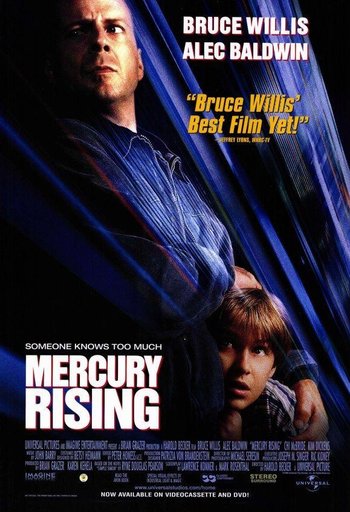 Mercury Rising is a 1998 action thriller film, based on the novel Simple Simon (1996) by Ryne Douglas Pearson. The novel was actually a sequel to October's Ghost (1994) and Capitol Punishment (1995), both of which also feature the main character Art Jefferson, renamed "Art Jeffries" for the film. The film was directed by Harold Becker, previously known for such films as Malice (1993) and City Hall (1996). The main stars were Bruce Willis, Alec Baldwin, and child actor Miko Hughes.

The novel was based on an Urban Legend: "that secret military intelligence codes were sometimes leaked to the public in puzzle magazines to see if civilians could crack them." The film begins with a Hostage Situation in South Dakota. FBI Agent Art Jeffries (Willis) is The Mole within the villains' ranks. He is trying to convince the others to surrender while protecting a teenaged boy. However the FBI task force attacks and kills both the robbers and the boy. Art confronts his superior and ends up demoted. Further, his psychological evaluation reports him as suffering from "delusional paranoia".

Elsewhere, 9-year old Simon Lynch (Hughes), an Autistic Idiot Savant, manages to break the code in a puzzle magazine and finds a telephone number. Which he innocently decides to call. He has just, unwittingly, broken a cryptographic code called "Mercury", created and used by the National Security Agency (NSA) since the Ronald Reagan Administration (term 1981-1989). The code was allegedly so complex that its creators believed no computer on Earth can decipher it. But two of them, Dean Crandell (Robert Stanton) and Leo Pedranski (Bodhi Elfman), had decided to put this to the test. They had published the code in the magazine to see if anyone could solve it. Unfortunately for all involved, Lieutenant Colonel Nicholas Kudrow (Baldwin) sees the boy as a liability. He sends Hitman Peter Burrell (Lindsey Lee Ginter) to take out Simon and his parents. He already has plans on how to deal with the security leak.

Burrell kills the parents but fails to locate Simon, who was hiding in a closet. The police and FBI briefly investigate the crime scene, though they incorrectly identify it as a murder-suicide. Jeffries locates Simon and takes the boy under his protection. However the boy is unable to explain what actually happened and the authorities are not particularly inclined to protect him. Jeffries is convinced that Simon is still in danger and takes matters into his own hands. Kudrow manipulates events to discredit Art and have him charged with kidnapping. Art has to crack the case, save Simon and protect his own reputation. He finds allies in fellow agent Thomas Jordan (Chi McBride) and friend Stacey Siebring (Kim Dickens). He also receives unexpected help by Emily Lang (Carrie Preston), the girlfriend of the already assassinated Pedranski.

The film was a modest box office hit, its worldwide gross estimated to 93,107,289 dollars. About 33 million of these dollars came from the United States market, where it was the 61st most successful film of its year. It received mostly negative reviews, dismissed as an uninspired action film with stock situations. Willis won a Golden Raspberry Award as Worst Actor for three of his 1998 films: Armageddon (1998), Mercury Rising and The Siege. On the other hand, Hughes was praised for his realistic depiction of autism and won a Young Artist award.

No relation to Jupiter Ascending.